After several days of ice and snow in Atlanta, most people are ready to get out of the house. For me, it’s practice for being a couch potato as I recover from surgery.

Nobody panic … it’s not a big deal. I’m just paying a medical professional to pick my nose.

I’ve had sinus problems for years. I always associated this with allergies, since the South is full of all kinds of nature that wants to get sexy in your nose. Things have been worse over the past two years, so I’ve decided to try more science. This is the kind of science where they remove parts of my head.

A recent CT scan showed I had obstructions in my sinus cavities. At first I only got to read the medical transcript, which didn’t fully demonstrate how messed up it is inside my head. Looking at the images made it clear … bone spur, deviated septum … I need some professional remodeling.

So Friday morning I’m going to Gwinnett Medical Center for what qualifies as a “simple medical procedure” … Endoscopic Surgery for Sinusitis. I need to have bones moved about and tissue removed. Apparently it’s bad for you to shove sticks up your nose, but it’s ok if someone knocks you out and lets a man in a white coat do it (he even gets paid).

There’s no external incision, so it’s not terribly invasive, but having metal rods stuck up my nose isn’t the kind of medical science I expected to see in 2014 … 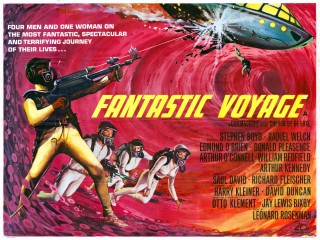 Of course, the recovery isn’t exactly my style. The first line on the recovery briefing is “plan to be a couch potato” (yes dear, my doctor told me to sit on my ass). For about two weeks I can’t exercise, lift anything, bend over for extended periods of time, eat spicy food, blow my nose or sneeze without having my mouth open. I can expect the first three days to be painful (yay drugs) and I’ll be very congested while things heal (ironic, isn’t it).

When my sinuses heal, I should be breathing better. It’s also possible my voice will change. I’m hoping for Barry White, but I’ll settle for Billy West.

So I’ll be off-line for a few days, then off work for over a week. This delays my return to martial arts, which was already behind schedule thanks to travel and polar vortices. I can’t spend time picking up around the basement, since that involves actually picking things up. I’ve been too much of a couch potato lately, so at least I have practice … but the surgery will be worth it. I should be able to sleep better and breathe easier, which is the entire point.

At least I can catch up on some movies and TV. Netflix, meet my new sinuses.